One month ago today, I attended the second of two races in the inaugural New York City ePrix. Life has been busy preparing for college, and I have not gotten a chance to properly recap my experience or share it with you all.

This was the third time I've attended a professional motorsport race but the first time it wasn't a NASCAR-sanctioned event. The previous two times have both been at Dover International Speedway, my home track. I went to Sprint Cup qualifying and the Camping World Truck race (the latter of which got rained out) in Spring 2009 and the Sprint Cup race in Spring 2012. (A. J. Allmendinger signed my diecast car!) 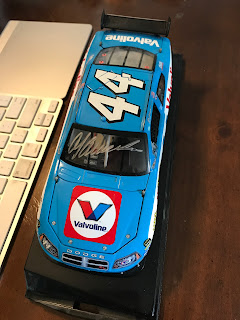 Now, NASCAR was my first motorsport love (thanks, Pixar), but over the years I've developed an interest and appreciation for virtually all forms of auto racing.

So when I heard Formula E, the first all-electric single-seater championship, was coming to Brooklyn...I knew I had to be there.

The timing of the event actually worked out perfectly. My family had been vacationing in Vermont the week prior to the event, so rather than going home and driving back up, my father and I arrived in Brooklyn Saturday evening. (I would have loved to have been there for the Saturday race too, but beggars can't be choosers. It simply didn't work out.) Of all people, my dad's sister who currently lives in London found us a small hotel in the city in which we would spend the night (particularly helpful considering that, being a street race on a temporary circuit, this event had absolutely ZERO parking).

With that, we were able to get up early and get there pretty much as soon as the gates opened. We walked from the hotel to the Barclays Center (home of the Brooklyn Nets and, as of 2015, the New York Islanders), hopping onto a shuttle bus that would take us to the street circuit. 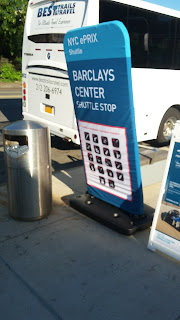 It's a good thing were got there early, because we got a chance to walk in the paddock! 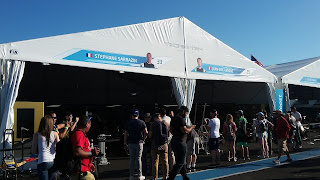 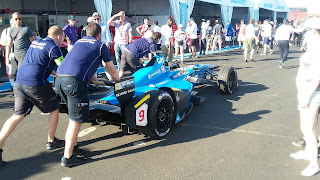 Aside from the race itself, this was absolutely the highlight of the day. If you're attending any racing event, get there early. You never know what kind of perks you might get as a result. 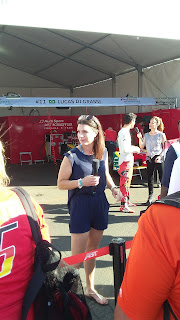 Katherine Legge was doing television coverage for the world feed. She's quite an accomplished racer herself, having raced in Formula E in its debut season and, perhaps most notably, the Indianapolis 500.

In the background of that picture is driver (and eventual 2016-17 Formula E champion!) Lucas di Grassi. After doing an interview, di Grassi posed with some fans before being called back into the garage by his team... ...and this is as close as I got to a picture with him. I did make brief eye contact with him and wished him well in the race as he was walking back in to talk to his team, but I didn't quite get a chance to pose with him. Oh well. At least he and I are in the same un-photoshopped picture. 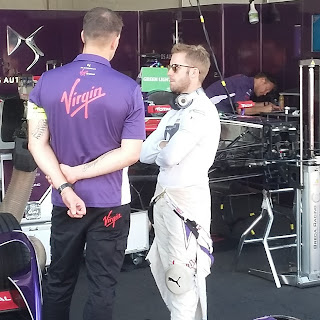 I also got to snap a photo of this guy, Sam Bird, talking to his team prior to qualifications. Bird had won the previous day's race and ended up winning this one as well. 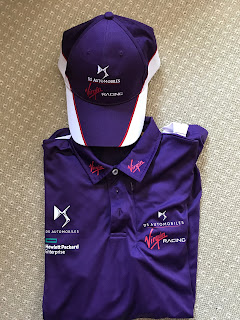 Considering I bought a DS Virgin racing hat and polo shirt at the merchandise stand, I think it's safe to say I have a favorite team and driver now.

After they closed the paddock for qualifications, we looked around for a bit, visiting the Jaguar team's exhibit and the Allianz eVillage. 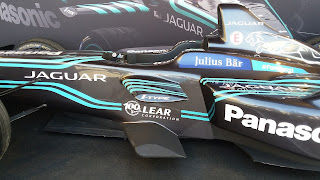 The video above is a clip from the "eRace." (Not ePrix, eRace. There is a difference.) This took place in the Visa Gaming Arena. All morning, fans were allowed into the gaming arena to set the fastest lap times they could on a Formula E racing simulator, with the top four fans getting to compete against four professional drivers in the "eRace."

Well, I wanted too, but I got to the exhibit too late. If I had headed straight there after the paddock had closed, maybe I could have set a lap time, but alas, it wasn't meant to be. (Lesson learned for an ePrix I attend in the future.)

If you want to watch the full eRace, here it is:


After the eRace was an autograph session, where I got autographs from drivers António Félix da Costa, Nick Heidfeld, and Felix Rosenqvist. 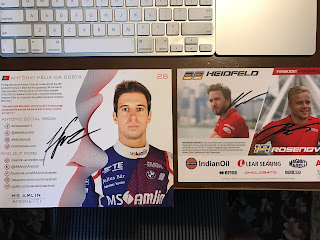 Then, it was time for the main event.

Here's the amateur video I took of the start...


and a couple of more photos... 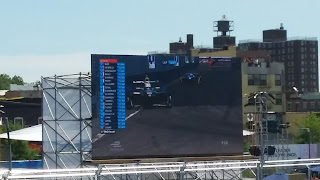 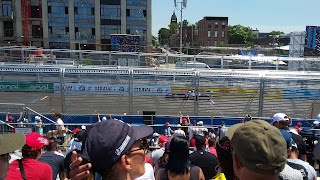 It was around the midpoint of the race that we finally met up with the third member of our group, Lucas Marrero. Lucas is quite a cool guy. He's a longtime friend of my grandmother and late grandfather who has traveled all over the world and done too many incredibly awesome things to keep track of. 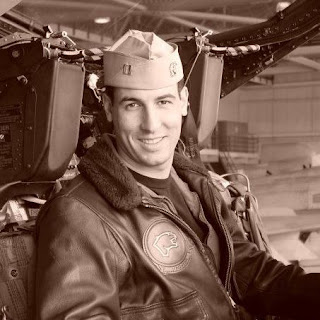 Seriously, those Dos Equis commercials are lying to you. Lucas is the real "Most Interesting Man in the World."

But anyway, back to the race. After 58 minutes and 9.388 seconds of hard racing (that's not a number I made up in my head), Bird completed his weekend sweep by winning the race. Of the two guys I saw in the paddock earlier in the morning, one went on to win the race, while the other went on to win the season championship two weeks later in Montréal. How cool is that?

After the race, we waited for a shuttle bus back to the Barclays Center (the wait for the bus might have been longer than the race itself), and had a late lunch/early dinner (linner?) at Shake Shack. (For my Delaware friends, this one was far better than the new one in the Christiana Fashion Center. I have no idea why...but it was.) After a great day of racing and catching up with Lucas, we returned to the hotel and made the two-hour drive back home.

And that's it! Formula E was a great experience. It still has its critics, but the series is really taking off. BMW, Mercedes, and Porsche have confirmed that they will be joining the series as full works teams in a few seasons, and there is a push to get a Japanese and an American manufacturer involved as well.

The series races (mostly) on temporary street circuits in some of the biggest cities all over the world. If you're interested in attending an ePrix yourself, here's the provisional 2017-18 schedule at the moment: 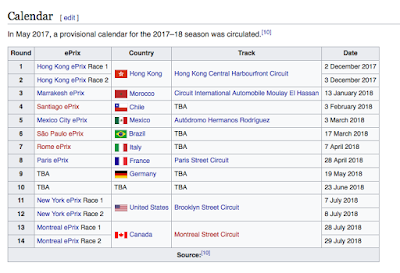 And while it's not set in stone, it looks like they're coming back to New York!

Posted by Benjamin Schneider at 4:06 PM