One of my favorite NASCAR blogs is Brock Beard's "LASTCAR." As the name suggests, the blog is dedicated to writing about the under-funded, under-appreciated, and under-followed drivers and teams in the sport. Over the last decade, the project has evolved into the premier source for NASCAR's last-place finishers and statistics. My fellow Wikipedia editor, William Soquet, is now a guest contributor at LASTCAR, covering the majority of the NASCAR K&N Pro Series East and West races as well as the ARCA Racing Series. 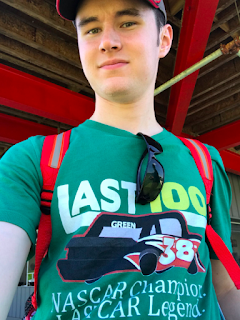 On Saturday, I attended the NASCAR K&N Pro Series East race at New Jersey Motorsports Park in Millville, New Jersey. The T-shirt I wore is a tribute to Jeff Green, the 2000 NASCAR Busch Series (now Xfinity Series) champion. Last season, Green earned his 100th last-place finish in the Xfinity Series, a mark he has been able to cross by becoming a "start-and-park" driver (someone who, out of necessity, parks a healthy car after only a handful of laps due to a lack of full funding) for many of the series' smaller teams, currently driving for Ryan Sieg's RSS Racing. The shirt reads "NASCAR Champion. LASTCAR Legend."

Jeff himself was even given a shirt last season when Brock traveled to Darlington. (More about that weekend can be found here.)

Shifting back to last weekend, as if the shirt I was wearing weren't already an indication, I'd be keeping my eye on the back of the field during the race just as much as the front of it.

The K&N Series mostly consists of two demographics. The first makes up the majority of the field: young, talented prospects who are competing to gain experience and eventually move up the NASCAR ladder. 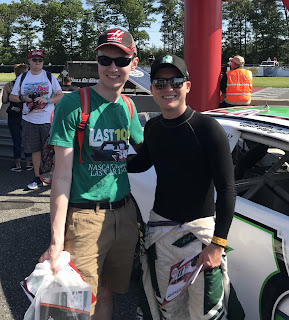 One of those guys is Will Rodgers. Will is an all-around good driver, but he is a master on road courses. He mostly runs the in the K&N West Series, but makes the trip out East for the road course races. In three career East Series starts, Will has three wins. How awesome is that statistic? 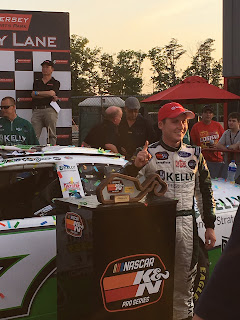 Above is Will in Victory Lane after the race. Keep your eye on him in the coming years. He's certainly a future star.

The other demographic most often seen in K&N is older veterans who just love to race. You might have heard the story of NASCAR Hall of Fame nominee Hershel McGriff, who became the oldest driver to start a NASCAR sanctioned race last month when he drove in the West race at Tucson at the age of 90.

Yes, NINETY. For comparison, his Bill McAnally Racing teammate, Hailie Deegan, is one of the up-and-comers currently in her rookie season. She's also only 16. That's a 74-year age difference between teammates.

Good luck finding that in any other professional sport.

For this race, two veterans were entered. The first was 57-year-old Dale Quarterley, a six-time K&N East winner. He qualified 15th and finished 13th after dropping out with a listed reason of "rear end" problems with the car.

The second veteran, who both started and finished last, had (and has) a much more intriguing story. 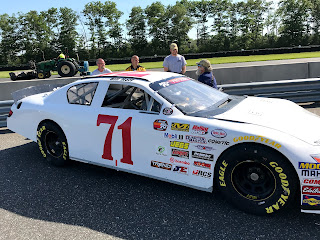 The car in the above picture belongs to 53-year-old Bill Hoff. Bill is a veteran of the then-Busch Series, driving in 22 races from 1996 to 2004. I saw Bill on the entry list last week and was excited to see how he did. This would be his K&N East debut. (For the record, he did technically attempt to qualify for one race in 2000. The series was then known as the Busch North Series and at the time ran several races in conjunction with the Busch Series. At Nazareth, Bill was entered under the Busch North Series banner but failed to qualify for the event.)

Unfortunately, he never turned a single lap all day. I was not surprised to see him sit out practice and qualifying. After all, his small team is self-owned and has no sponsorship whatsoever aside from the generic contingency decals. His car is likely at least a decade old. I figured he was probably saving his equipment knowing the risk of turning a lap and damaging the car far outweighed the benefits.

Since Bill never set a qualifying time, he would start from last place, meaning his car was lined up last on the grid while us fans were granted access to the pit lane to meet the drivers and get autographs. While dozens of people surrounded Will, pole-sitter Ernie Francis Jr., and series points leader Tyler Ankrum among others, no one was at Bill's car asking for his signature.

I decided to change that. 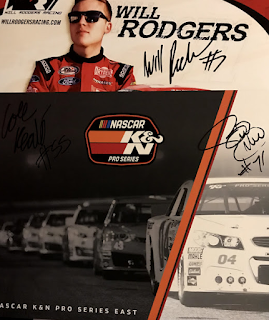 Some of the top drivers (such as Will) had personalized hero cards of their own to autograph and hand out to fans. Others such as Cole Keatts, making his series debut, had generic K&N cards (it's tough to tell, but his signature is at the top left). Bill had neither, but he did have a Sharpie in hand.

He introduced himself to me, shook my hand, and asked, "Are you collecting cards?" I answered yes, and pulled out the one Cole had already signed. Bill signed it on the other side in the top right corner. 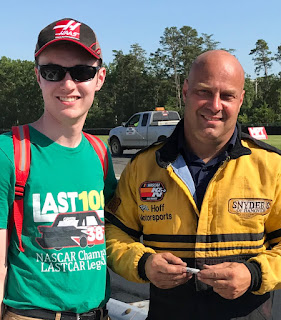 I really wish I had spent a few more minutes talking to him. Bill doesn't have anywhere near the amount of funding and support the other drivers enjoy, but he still seemed glad to be on the grid. It was great getting to meet him.

We then headed to our seats. I decided to sit in turn 12, the final corner that leads onto the main straightaway, so that we could watch both the start and the finish. 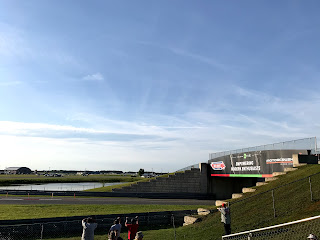 When the pace car pulled into the pits, 15 cars took the green flag to start the race. One car was missing from the start, though that detail probably went unnoticed by 99.9% of the fans there.

I had little to no contact with anyone after the race. I rushed to Victory Lane to join in on the celebration with Will and the other fans. I walked past a frustrated Tyler Dippel and his wrecked race car after he collided with his teammate and points leader Tyler Ankrum on the final lap. I didn't see Bill or his car, though I assume they had probably already left the track. All I know is what the rest of the world knows: Bill "finished" (though he technically never even got the chance to start) in last place due to some mechanical problem.

There's very little information on Bill online; the only article I could find on him was this one from The Press of Atlantic City, which only mentioned him briefly as part of a list of drivers competing in the race on Saturday.

I did find this YouTube video, however. In the video, Bill says he drives for Ace Motorsports, a team he calls "the best group of guys I know." That's interesting, because Racing-Reference listed his sponsor as "Hoff Racing" in the results spreadsheet. In the video, Bill confirms, "I love to race. But it's expensive. Big teams have big sponsors, but our funds are coming out of our pockets." He continues, "Why are we getting back into racing? Well, we never left. We just didn't have a race car on the track....Our race team is a great bunch of guys. We're all friends first. We have mechanics, police officers, and accountants. They all help in a lot of different ways."

Bill goes on to say that he and his team are selling merchandise and, more importantly, advertising space on the car. Running unsponsored these days is virtually impossible. A tire bill for one weekend alone can cost up to $10,000. A good engine is upwards of $50,000. Bill and his team are making do with what they have.

Apparently, what they have is sadly not even enough to be able to complete a single lap at a K&N East race.

I have no idea when we'll see Bill back at the track. The East Series doesn't race again until July 14 in Thompson, Connecticut, and him being on the entry list is not even close to a guarantee. But in the meantime, I want to bring his story to attention because stories like his are rarely if ever mentioned in today's NASCAR.

This is ultimately the goal of LASTCAR. Mainstream media will talk about Jimmie Johnson, Kyle Busch, and Martin Truex Jr. for hours on end, beating to death the stories that most fans have heard countless times already. LASTCAR will talk about fourth-generation driver Jeffrey Earnhardt racing in the 2018 Daytona 500 for a small team owned by Derrike Cope, the man who beat Jeffrey's famous grandfather Dale Earnhardt after Dale suffered a flat tire on the last lap of the same race 28 years earlier.

One of the sidebars on Brock's website reads, "40 cars start a Monster Energy NASCAR Cup Series race. 40 fill the grid in the Xfinity Series. 32 take the green in Trucks. Yet, even when the field is short, only a handful of these stories are ever told."

Brock is right. Many of those stories aren't ever told. It's a shame, because there are some good stories out there.

And, like the story of Bill Hoff and his last-place finish at New Jersey Motorsports Park, those stories are worth telling.
Posted by Benjamin Schneider at 2:06 AM